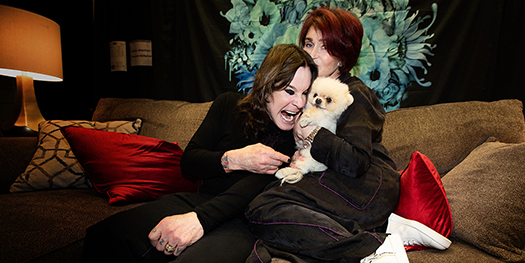 “I never thought I’d make it this far,” he says. “Fifty years is a lot. I don’t understand why I’m alive still after the hell-raising days. I guess whoever the man is upstairs, if there even is one, wants me to stick around.”

So far, his current tour has taken him to South America and Europe. When he meets with Rolling Stone, Ozzy is in suburban Allentown, Pennsylvania, where he’s kicking off the North American leg of the tour.

… He’s dubbed the trek the No More Tours 2 Tour, since he says it will be his final full world tour. He’s adamant that he’s not retiring — “In essence, what I’m trying to do is slow my lifestyle down to a more comfortable way of living,” he says — and he’s reserving the right to do short runs that focus on one particular continent in the future. He’s turning 70 in December and wants more time with his grandkids. But at the same time, after spending the past half-century on the road, he’s not ready to give it all up either. “I’m no good at anything else,” he says earnestly. “I literally can’t do anything else.”