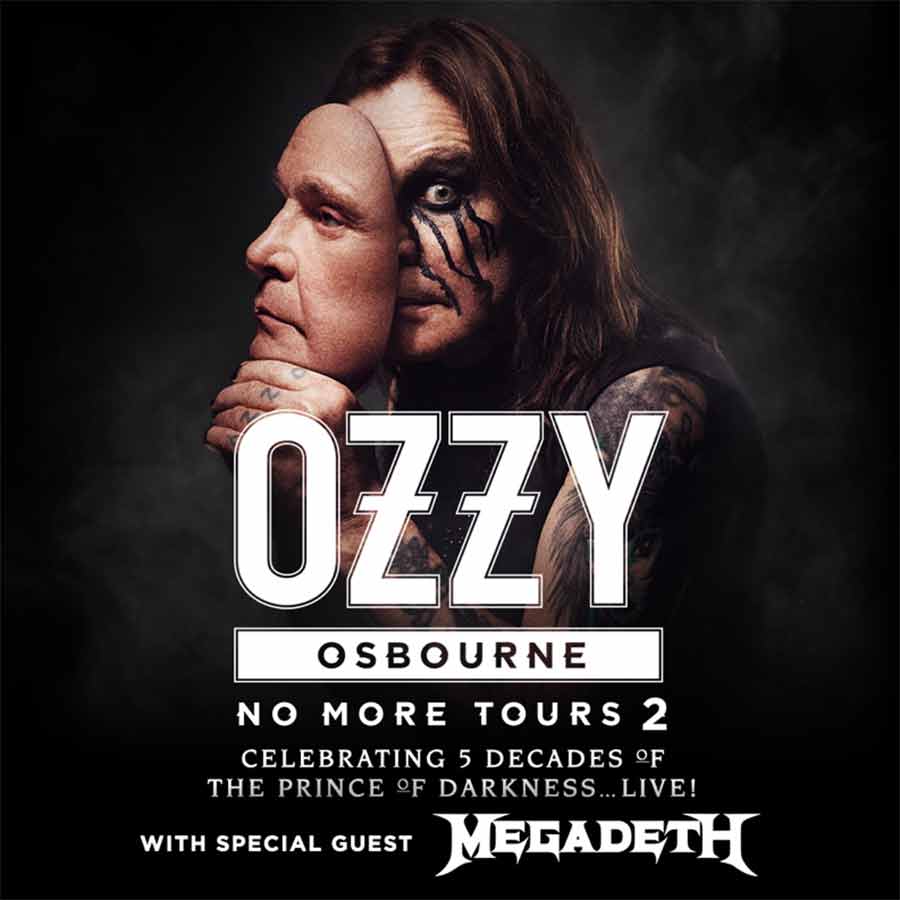 Tickets for the 2019 North American “NO MORE TOURS 2” shows go on sale to the general public starting Friday, November 9 at 10:00 AM local time at LiveNation.com and through the Live Nation app. Citi is the official presale credit card of the tour. As such, Citi cardmembers will have access to purchase presale tickets beginning Tuesday, November 6 at 10:00AM (local time) until Thursday, November 8 at 10:00 PM (local time) through Citi’s Private Pass® program. For complete presale details visit www.citiprivatepass.com.

The “NO MORE TOURS 2” tour launched in May 2018 in Santiago, Chile for solo shows in three countries followed by a six-week European leg of headlining solo dates and festival performances. A North American tour followed kicking off August 30 in Allentown, PA, with the final four shows of that leg of the tour postponed for OZZY to recover from an infection. Those four shows–Shoreline Amphitheatre in Mountain View, CA, North Island Credit Union Amphitheatre in Chula Vista, the Hollywood Bowl in Los Angeles and MGM Grand Garden Arena in Las Vegas–will now conclude the 2019 dates. Tickets for these rescheduled dates are on sale now at LiveNation.com. The trek will also include a newly announced June 11 stop at Madison Square Garden in New York City. Prior to his 2019 dates, OZZY will headline a special New Year’s Eve OZZFEST spectacular at the Forum in Los Angeles.

On his upcoming farewell world tour, produced by Live Nation, OSBOURNE will celebrate more than five decades as a performer (both as a solo artist and as lead singer of Black Sabbath which formed in 1968). This tour, expected to take OZZY around the world with dates into 2020, will mark the end of global touring for the legendary artist, though he will continue to perform select live shows in the future. Throughout his career, OZZY has sold more than 100 million records.

This will mark the first time Megadeth will join OSBOURNE for a full tour, although they have performed together previously at OZZFEST and other festivals around the world. Megadeth burst onto the scene thirty years ago, virtually inventing a genre with their debut album Killing Is My Business… And Business Is Good! (recently recognized by VH1 as the Greatest Thrash Metal Debut Album of All Time) sold more than 38 million albums worldwide, earning numerous accolades including a 2017 GRAMMY® Award for “Best Metal Performance” for the title track of their fifteenth studio album Dystopia, 11 additional GRAMMY® nominations, a SILVER CLIO for their Dystopia campaign and scored five consecutive platinum albums—including 1992’s two-million-selling Countdown to Extinction.

Here’s some critical feedback from the 2018 North American “NO MORE TOURS 2” shows:

“As Ozzy Osbourne, the main attraction, he becomes the consummate showman…Both Osbourne and his band were in top form throughout the evening. Ozzy’s voice was strong and on pitch, even during some of the songs’ impossibly high parts, and Wylde & Co. seemed to play a bazillion notes each on their instruments.”
–Kory Grow, ROLLING STONE (8/31/18)

“From the get-go, it was evident there was something special about this tour. The stage backdrop is absolutely magnificent, highlighted by a giant cross made up of video screens…As great as Ozzy sounded, his backing band deserves as much praise. This is what a metal band should look like.”
–Spencer Kaufman, CONSEQUENCE OF SOUND (9/10/18)

“The return of Zakk Wylde to Ozzy’s band made the biggest impact on the show. His energy, enthusiasm and love for the material and Ozzy raises everyone’s game, and their game was already great…But the highlights of the show were, of course, when Ozzy was on stage. Powerful version of ‘Bark at the Moon,’ ‘No More Tears,’ ‘Mr. Crowley,’ ‘Suicide Solution,’ ‘I Don’t Know,’ ‘Crazy Train’ and Sabbath’s ‘Fairies Wear Boots’ thrilled fans.”
–Brian Ives, LOUDWIRE.COM (9/9/18)

“Fortunately, Ozzy’s game is fairly tight at the moment. Tuesday night’s gig was a solid 95 minutes’ worth of entertainment. No messin’ around with iffy new stuff, just a whack of old-school favorites delivered with contagious enthusiasm by Osbourne and his band before a sold-out, 16,000-strong crowd hanging lovingly and loudly on every word and every riff. If this does indeed turn out to be Ozzy’s last visit to Toronto, we got exactly what we wanted.”
–Ben Rayner, TORONTO STAR (9/5/18)

“…the show was an exciting evening that featured one of rock’s biggest stars doing what he does best, entertaining a crowd with music that impacts generations.”
–Matt Durr, MLIVE.COM (Detroit) (9/20/18)

“This tour does just about everything right when it comes to playing to the strengths that 2018 Ozzy possesses. The setlist is pretty much perfect, focusing on the hits from his solo work while mixing in some well-times Black Sabbath classics…The band plays like a well-oiled machine…And then there’s Ozzy’s clear enthusiasm for being out on stage…Ozzy could easily sit on a throne in the middle of the stage and no one would have complained. But he’s still giving what he can, the way he always has.”
–Cory Garcia, HOUSTON PRESS (9/29/18)

“The Prince of Darkness showed that age is just a number…Osbourne lived up to his own legacy (as if he really had to) by preparing a setlist of such epic proportions, that it seemed as if he had created a tribute to himself by the end of the night…If this is, in fact, his final globe trot, The Great and Powerful Ozz gave nothing short of 100 percent of himself in Mansfield, and, in turn, further cemented his legacy as the brightest beam of darkness in rock and roll.”
–Jason Greenough, VANYALAND.COM (Boston) (9/10/18)