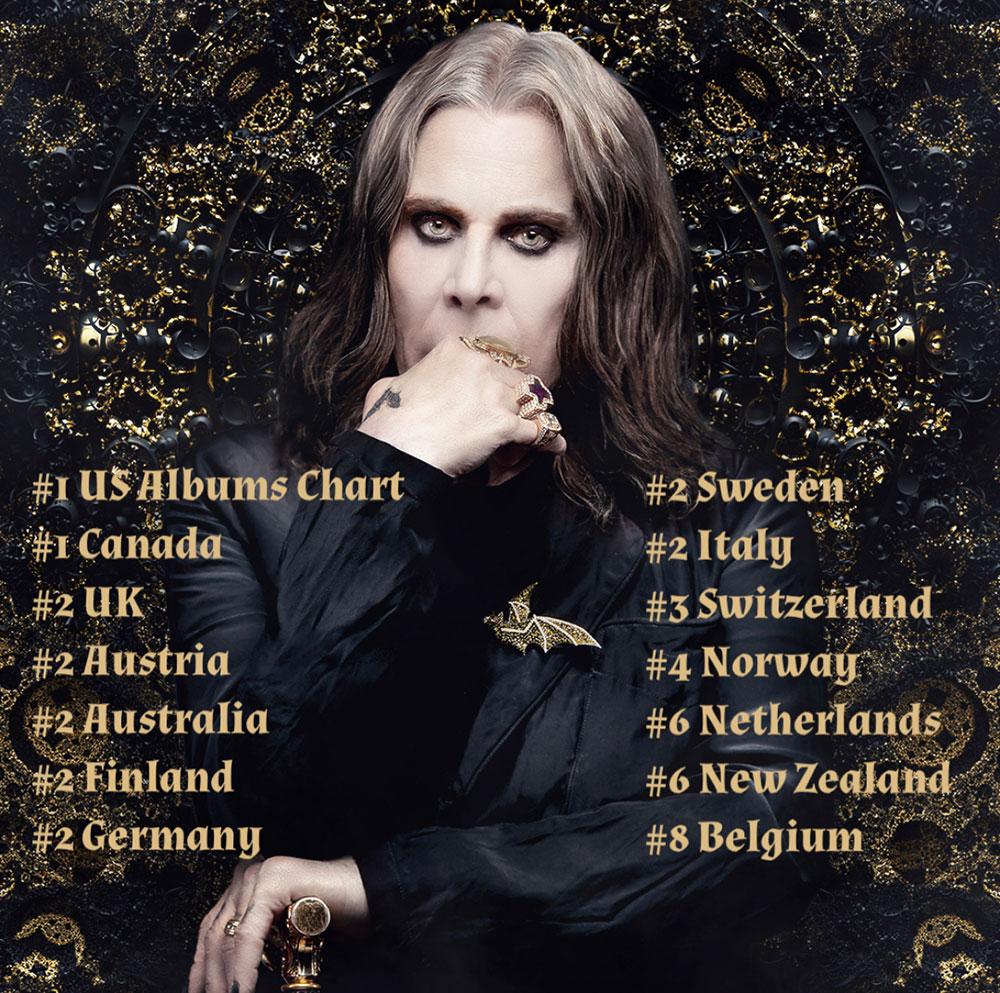 IN THE U.S. ALBUM LANDS AT #1 ON SEVEN SEPARATE CHARTS

Rock and Roll Hall of Fame inductee and Grammy®-winning singer and songwriter OZZY OSBOURNE has topped his previous chart entries with record-breaking numbers around the world for his critically acclaimed new album PATIENT NUMBER 9.

Released September 9 and marking OZZY’s 13th solo studio album it triumphantly sets new career highs for OZZY. In the U.S., the album debuted at #1 on multiple charts: Top Album Sales (Ozzy’s first #1 ever on this chart), Top Current Album Sales (another first), Top Rock & Alternative Albums, Top Rock Albums, Top Hard Rock Albums, Top Vinyl Albums and Tastemaker Albums charts; and at #3 on the Billboard Top 200 albums chart.  Globally, the album charted at #1 in Canada (OZZY’s first-ever #1 there); career high #2 entries in the UK, Australia, Finland and Italy; #6 in the Netherlands and New Zealand; #8 in Belgium; and #14 France. Other highlights include #2 Austria, Germany and Sweden; #3 in Switzerland; and #4 in Norway.

Working with producer Andrew Watt for the second time, OZZY welcomed a dynamic A-list featured guests on the album. For the first time ever, Black Sabbath co-founder, guitarist, and riff-master Tony Iommi appears on an OZZY solo album. The record also boasts guitarists Jeff Beck, Eric Clapton, Mike McCready of Pearl Jam, and longstanding righthand man and six-string beast Zakk Wylde who plays on the majority of the tracks. For the bulk of the album, Chad Smith of Red Hot Chili Peppers held down drums, while the late Taylor Hawkins of Foo Fighters appears on three songs. Old friend and one-time OZZY band member Robert Trujillo of Metallica plays bass on most of the album’s tracks, with Duff McKagan of Guns N’ Roses and Chris Chaney supplying bass on a few songs.

“It’s a This Is Your Life collection of the artists who influenced, played with, and were inspired by Osbourne, and, even with all the star power, it never feels like anything other than an Ozzy Osbourne album…an album that rocks harder than Ordinary Man without losing sight of Osbourne’s love of melody.”

“Patient Number 9 is fully a hard-rock and metal record…whether he gets back onstage or in a studio (and as his slowly improving health allows), this heavy-metal patient only sounds recharged…”

Through it all, Osbourne sounds full of life…Patient Number 9 is a more focused work…there was speculation around Ordinary Man’s release that it could be Osbourne’s final album. Patient Number 9 proves that theory wrong. Don’t count him out just yet.”

“The songs are tightly written…also finely balanced, the choruses big and bold enough to attract attention
but not overshadow the main attraction’s essential essence.”

“This is a swashbuckling return.”
Daily Mail

“He’s doing the very things that first made him such an appealing Rock villain.”

“Patient Number 9: a defiantly bravura set of melodic metal on which the 73-year-old
genuinely sounds as though he’s having the time of his life.”

“…in favour of a darker, heavier, more nuanced strain of epic metal,
Ozzy has conjured some of his strongest material in decades.”

“…a massive celebration of life and friendship and the magic power of music.”

“This one is a star-studded affair.”